6 replies to this topic

(Reuters) - An Airbus operated by Lufthansa's Germanwings budget airline crashed in a remote area of southern France on Tuesday and all 148 on board were feared dead.

French President Francois Hollande said he believed none of those on board had survived.

"There were 148 people on board," Hollande said. "The conditions of the accident, which have not yet been clarified, lead us to think there are no survivors."

French media said there were 142 passengers and six crew on board.

Hollande said there was likely to be a significant number of Germans on the flight from Barcelona to Duesseldorf.

He added: "The accident happened in a zone that is particularly hard to access."

A spokesman for France's DGAC aviation authority said the airliner crashed near the town of Barcelonnette about 100 km (65 miles) north of the French Riviera city of Nice.

French accident investigators were heading for the crash site in Meolans-Revel, a remote and sparsely inhabited commune in the foothills of the French Alps.

Airbus said it was aware of reports about the crash.

"We are aware of the media reports," Airbus said on Twitter. "All efforts are now going towards assessing the situation. We will provide further information as soon as available."

The crashed A320 is 24 years old and has been with the parent Lufthansa group since 1991, according to online database airfleets.net 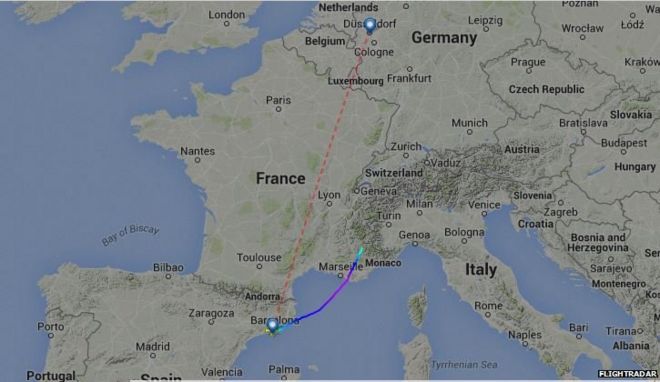 An Airbus A320 airliner has crashed in the French Alps between Barcelonnette and Digne, French aviation officials and police have said.

The jet belongs to the German airline Germanwings, a subsidiary of Lufthansa.

The plane had reportedly been en route from Barcelona to Dusseldorf and was carrying 142 passengers and six crew.

French President Francois Hollande said: "The conditions of the accident, which have not yet been clarified, lead us to think there are no survivors."

Mr Hollande said the crash was a tragedy and called for solidarity with the victims, adding that the area was very difficult to access.

He said he would be speaking shortly with German Chancellor Angela Merkel.

French Prime Minister Manuel Valls said he had sent Interior Minister Bernard Cazeneuve to the scene and a ministerial crisis cell to co-ordinate the incident had been set up.

The interior ministry said debris had been located at an altitude of 2,000 metres.

Both Airbus and Germanwings have said they are aware of the reports but cannot yet confirm them.

The Airbus A320 is single-aisle passenger jet popular for short- and medium-haul flights.

Valls said he fears those aboard the flight from Barcelona, Spain, to Dusseldorf, Germany -- 142 passengers and six crew members -- may be dead.

"The conditions of the accident are not yet clear but lead us to believe there will be no survivors," Hollande said.

Because of the terrain, it will be a difficult site for rescuers to access, Zeisser said. A police helicopter is in the area, he said.

The twin-engine Airbus A320s, which entered service in 1988, is generally considered among the most reliable aircraft, aviation analyst David Soucie said.

The crash site would be nearly halfway between Barcelona and Dusseldorf. Crashes mid-flight are rare, as most happen near takeoff or landing, CNN aviation analyst Mary Schiavo said.

CNN's Laura Akhoun in Paris and Lindsay Isaac in London contributed to this report.

Crash: Germanwings A320 near Barcelonnette on Mar 24th 2015, lost height and impacted terrain

French Police reported two helicopter spotted the remains of the aircraft on the ground between Prads-Haute-Bleone and Barcelonnette (France) at about 2700 meters elevation (8800 feet), about half way between the two cities there is a mountain ridge rising up to 8900 feet.

The President of France reported, it does not appear there are any survivors. The crash site is very difficult to reach.

France's DGAC reported the crew transmitted an emergency call just prior to the aircraft disappearing from radar near Bassinet.

Lufthansa, parent company of Germanwings, reported they do not yet know what happened to flight 4U-9525.

Radar data suggest the aircraft had reached FL380 about 3 minutes prior to leaving FL380 and descended from FL380 through FL110 in 8 minutes (average rate of descent 3375 fpm). The aircraft appeared to have levelled off at FL068 for one minute while on a northeasterly heading of 26 degrees true, mountains rise up to 8900 feet about 1nm north of the last reported aircraft position.

Back to เสวนา...ภาษาคนบ้าการบิน (Flight Mania)