58 replies to this topic 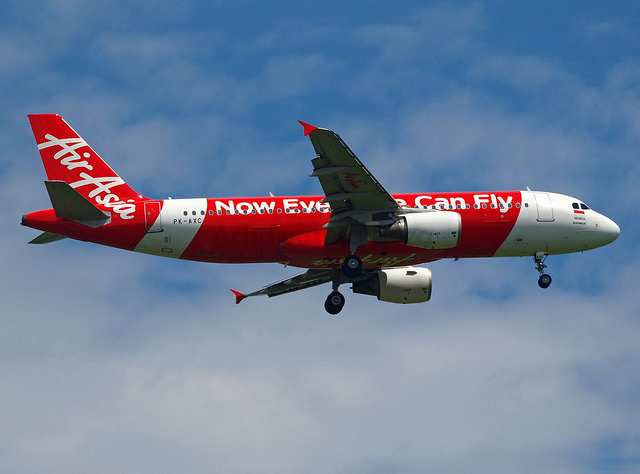 He said the plane had asked for an unusual route before it lost contact. 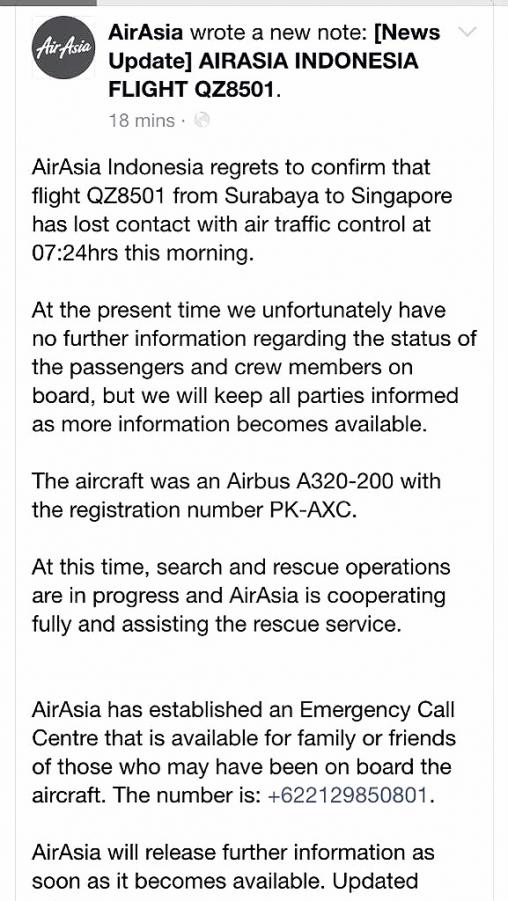 (CNN) -- The search is on for AirAsia Flight 8501, which lost contact with air traffic control in Indonesia, the airline said Sunday.
Flight QZ 8501 from the Indonesian city of Surabaya to Singapore lost contact with air traffic control at 7:24 a.m. Sunday (7:24 p.m. Saturday ET), AirAsia said
"At the present time we unfortunately have no further information regarding the status of the passengers and crew members on board, but we will keep all parties informed as more information becomes available," AirAsia said in a statement.
The plane had 155 passengers and crew on board, the news agency Reuters reported, citing Indonesian transport officials.
The flight, an Airbus A320-200, was on its way from Surabaya in Indonesia to Singapore, according to the airline's website.
The plane left Juanda International Airport at 5:27 a.m. Sunday (5:27 p.m. Saturday ET) and was due to arrive in Singapore at 8:37 a.m. Sunday (7:37 p.m. ET), according to the website.
The loss of contact with the AirAsia plane comes more than eight months after the disappearance of Malaysia Airlines Flight 370, which dropped off radar over Southeast Asia in March.
Searchers are yet to find any debris from Flight 370, which officials believe crashed in the southern Indian Ocean.
ข้อมูลเพิ่มเติม เครื่องบินลำนี้เป็น แอร์บัส เอ320 ทะเบียน PK-AXC ส่งมอบเมื่อ 16 ตุลาคม 2551

Flightradar24 did not pick up any emergency signals from #QZ8501 The signal was just lost at 23:12 UTC 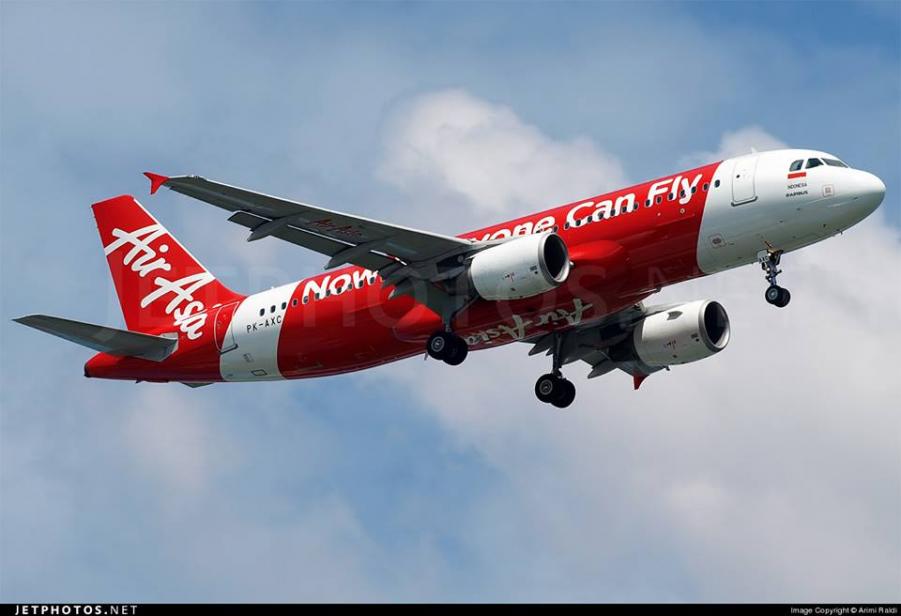 AirAsia flight QZ8501 from Surabaya to Singapore is believed to have crashed at the location 03.22.46 South and 108.50.07 East, in waters around 145 kilometers from Belitung, a National Search and Rescue Agency (Basarnas) official has said.

Basarnas Pangkalpinang spokesperson Supriandi said, as reported by Antara news agency on Sunday, that it had dispatched a rescue team to Belitung.

It is believed that the Airbus A320 had circled over the sea near Belitung to avoid a storm before it experienced severe turbulence and crashed into the ocean. QZ8502 is reported to have had 155 passengers on board, 16 of which were children. (ebf)

An aircraft has reportedly crashed in the waters off East Belitung, off the east coast of Sumatra, after authorities confirmed that AirAsia Flight QZ8501 went missing earlier today.

The Bangka Pos news portal said there was no confirmation of the crash site.

"Pak Danlanud called Bapak Basuri to say that an Airbus aircraft had crashed in the Beltim waters," the portal quoted Yuhinu, the adjutant to the local authority chief Basuri T Purnama.

The flight with 155 on board had left Surabaya at 5.20am Indonesian time and was scheduled to land in Singapore at 8.30am Singapore time.

Western Indonesia is an hour behind both Malaysia and Singapore.

Bangka Post said authorities received information that the location is at Babel coast, but the exact place was still unknown.

“We are still coordinating and gathering information from the fishermen and the ships passing through the Beltim coast,” said AKP Yanto when contacted by Bangka Pos.

The information came right after the announcement that AirAsia flight from Surabaya to Singapore lost contact with the Jakarta Air Traffic Control at 7.34am.

Transport Ministry Flight director Djoko Murjatmojo told Kompas.com, another Indonesian news portal, that the flight dropped off radar and he was monitoring the situation and reports on the incident.

Real-time flight tracker Flightradar said the missing flight was an Airbus A320 with the registration number PK-AXC.

Tempo also reported that East Belitung city official Basuri Tjahaja Purnama has received information on the possibility of an aircraft crash at the area.

The report said he deployed fishermen and local government officials to start the search and rescue effort with the Indonesian navy and East Belitung marine police.

“Four information centres has been set up at several locations to coordinate the search effort and relay information.

Basuri admitted that the exact location of the crash has yet to be identified and added he could not confirm if the aircraft is the missing AirAsia QZ8501.

Meanwhile, Reuters reported that Singapore had activated its air force and navy to help in the search and rescue operation for the AirAsia jet.

"Two C130s are already on stand-by for this purpose. We remain ready to provide any assistance to support the search and rescue effort," the Civil Aviation Authority of Singapore said in a statement.

A waiting area, and facilities and support have been set up for relatives at Changi Airport Terminal 2, it said.  – December 28, 2014. 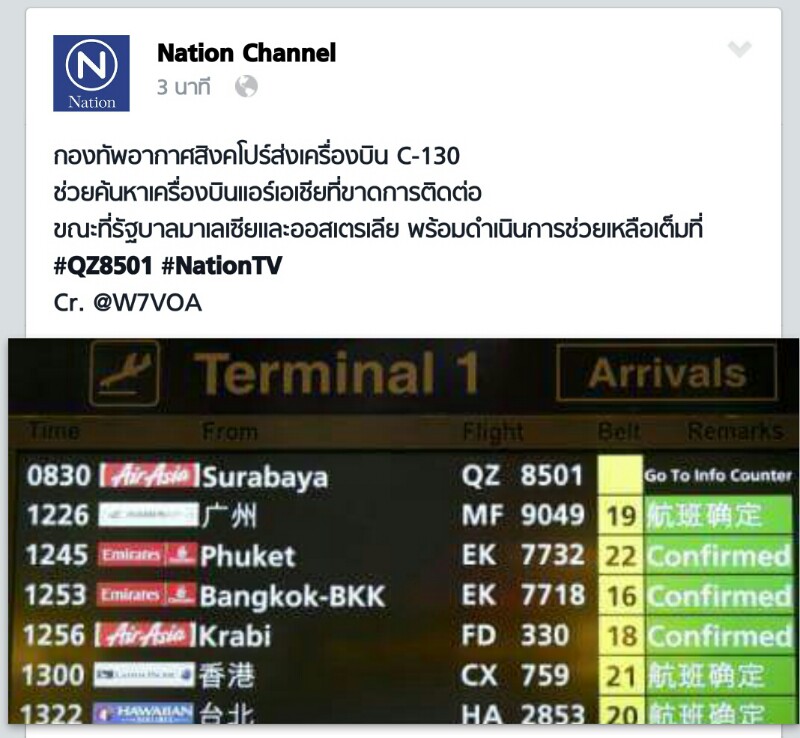 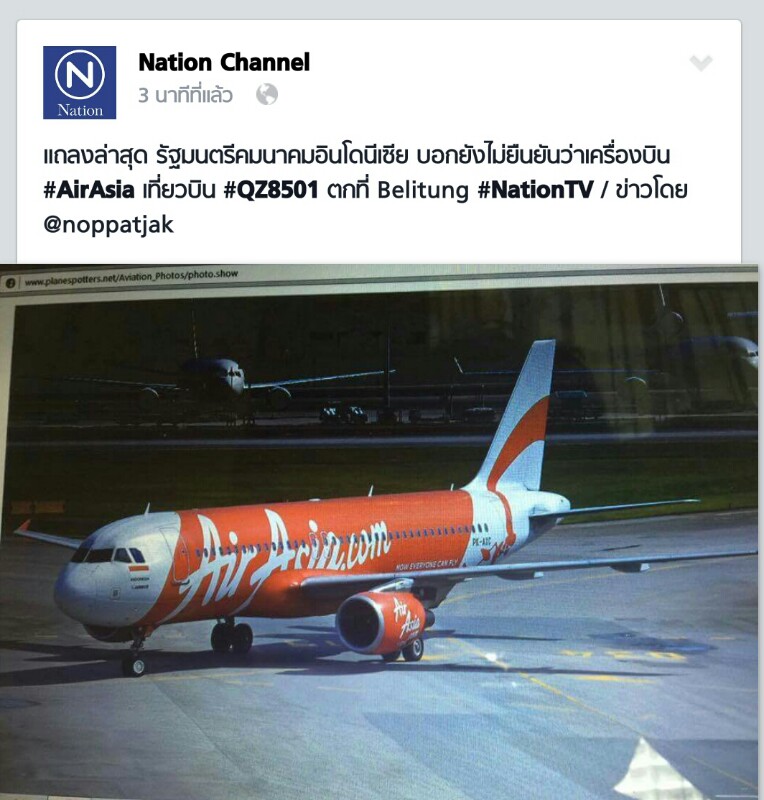 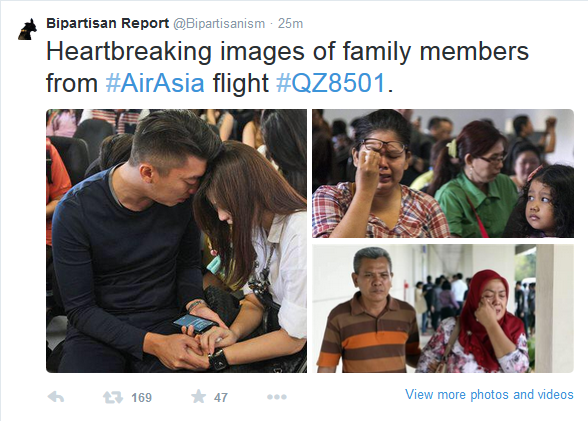